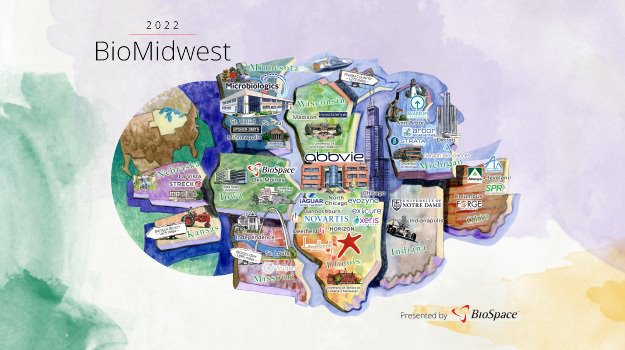 Chicago and its collar communities are home to a number of legacy companies, including AbbVie, Astellas, Abbott Biolabs, Horizon Therapeutics, and Exicure.

In recent years, others have moved to the area, taking advantage of new wet lab space that has been or will be built, as well as lower-cost real estate options. John Conrad, president and chief executive officer of the Illinois Biotechnology Innovation Organization (iBIO), said bioroom The division is seeing “exponential growth” in new business and a 33% increase in the talent pool.

Conrad pointed to several projects across the region that have expanded wet lab space in recent years. This includes the Fulton Labs and Portal Innovations Institution to support startups. Fulton Labs is also home to iBIO.

Other recent wet lab expansions across the region include the 125,000 square foot, five story Lincoln Park building currently under development by Sterling Bay. The facility includes state-of-the-art wet lab space and other facilities for life science companies. Before the announcement of new facility called The Labsno new wet lab has been built in the city since 2012.

“The expansion of the laboratory space is crucial. We’ve added about 1 million square feet,” Conrad said, adding that the lab space is “at a fraction of the cost of either coast.”

READ:  How entrepreneurs in Nigeria are finding value in waste

Earlier this year, real estate firm Mark Goodman & Associates closed on an area of ​​1.5 hectares in the Fulton Market neighborhood of Chicago, which will be the site of a new 16-story life sciences facility. The 400 N. Elizabeth St. property is billed as “Chicago’s first purpose-built laboratory and research and development building designed specifically for the fast-growing life sciences and biotechnology industry.”

Gutman tells bioroom The company is completing its marketing materials for prospective tenants. Once an anchor tenant is secured, construction of the facility will begin, he said. Goodman speculated that the anchor tenant would need to occupy no less than 150,000 square feet prior to construction, which he said is “a challenge in this market.” Nevertheless, he hopes to find such a tenant quickly.

“I love this market. I want it to succeed,” he said.

It’s these new locations that are attracting the attention of companies outside the region, Conrad said. He explained that businesses, particularly smaller businesses on the West and East Coasts, concerned about rising real estate prices are looking to Illinois to locate.

Conrad pointed to it Xeris Biopharmawho moved to Chicago from Texas in 2020, and Talis Biomedicalwho came to the city from California in 2021. Both companies moved into Trammell Crow Co.’s Fulton Labs development.

The Chicago community “shares the same vision and passion for the potential that life sciences, healthcare, technology and innovation can have for society at large,” said Brian Coe, co-founder and former CEO of Talis, in a expression last year. This allows the company to tap into the “huge talent pool that is the city’s startup and innovation ecosystem,” he added.

READ:  Trinbago 2023 Commonwealth Youth Games on mission to change lives for the better

“It’s really exciting for us. It immediately shows that companies are considering this area,” he said. Without giving much away, Conrad noted that a major pharmaceutical company had been in talks with iBIO about potential business developments or partnerships in the region.

With its rich history, strong universities and numerous cultural attractions, Chicago is a great location for companies to set up R&D facilities, according to Conrad. He predicted that companies will continue to recognize this and consider the region in their business plans.

In addition to the development of wet laboratory space by development companies, the state government has also put its weight and financial resources into this effort.

Funding 2021 built at 9 million dollars committed by the same office in 2020. The grants support the development of wet lab spaces, with projects at universities and in incubators. Rosalind Franklin University in North Chicago received $2 million support expansion its innovation and research park. This site accommodates researchers working on NIH-funded projects as well as collaborations with industry partners.

Chicagoland’s other recipients include Back of the Yards Algae Sciences (BYAS) in Chicago, the Illinois Institute of Technology, Northwestern University and NuMat Technologies in Skokie.

While the additional wet lab space is attracting the attention of business development executives outside of Illinois, other efforts to support entrepreneurship are encouraging the creation of new businesses from the area’s universities.

This is a reversal of the situation a few years ago, when cutting-edge research from universities was licensed out by non-state interests.

One such company is Vanqua Bio, which started last year with $85 million in Series B funding. The startup is focused on developing next-generation drugs for neurodegenerative diseases, including Parkinson’s, Alzheimer’s and ALS. Vanqua’s technology platform is based on research by Dimitri Krainc, Chair of the Department of Neurology at Northwestern University’s Feinberg School of Medicine and Director of the Krainc Laboratory.

Conrad said universities are investing in leadership and training young entrepreneurs, which is boosting the start-up landscape.

Other startups include Oxalo Therapeutics, which is developing a therapy to safely remove oxalate from the body and prevent recurring kidney stones. Oxalo started with the support of an innovation fund at the University of Chicago.

The fund also supported the creation of Onchilles Pharma, a pre-clinical stage oncology company. In addition to this fund, Chicago has also benefited from the Establishment of a fellowship program by the Chicago Biomedical Consortium (CBC), which supports entrepreneurs.

CBC executive director Michelle Hoffmann said at the time, “We believe this has the potential to grow and transform the biotech ecosystem in Chicago.”