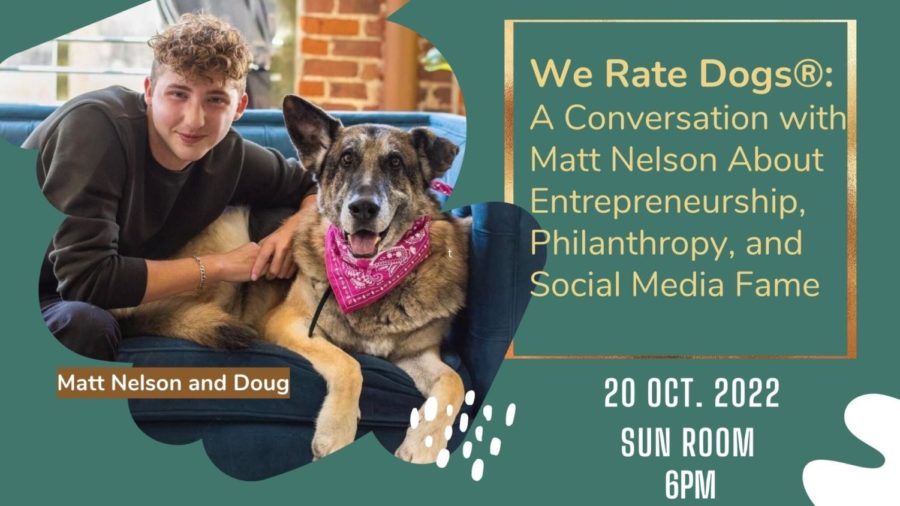 The creator of the Twitter phenomenon WeRateDogs will be speaking about entrepreneurship, social media fame and dogs at a free speaking event tonight. Courtesy of ISUlectures.

By the age of 10, Doug had serious ear infections, visible arthritis, and behavioral problems that reduced his chances of adoption. Today, Doug is the CEO of the Twitter phenomenon WeRateDogs.

Doug, a German shepherd, was adopted in 2020 by Matt Nelson, creator of WeRateDogs and an established dog lover. Soon after, Nelson used WeRateDogs to start a foundation that sponsors dogs with behavioral or medical issues that are unlikely to make it out of the shelter.

The foundation is one of many success stories to emerge from Nelson’s social media platform WeRateDogs.

Nelson will visit the state of Iowa on Thursday to talk about entrepreneurship, social media fame and, of course, dogs. The lecture will be held at 6 p.m. in the Memorial Union Sun Room and is free to attend.

Nelson started WeRateDogs as a Twitter meme account that posted dog photos with “better than perfect” cuteness ratings every day.

One of the account’s recent posts features a dog named Krypto wearing a birthday hat to celebrate his 15th birthday. Crypto received a rating of 14/10.

“I think the whole idea is that there’s nothing negative about what’s going on,” said Laura Bade, associate director of the speaking program. “There’s a lot of negativity in the world, a lot of negativity that you can find on social media … so it’s just really cool to see how much people’s dogs mean to them.”

Since its inception in 2015, the account has exploded in popularity with more than 9 million Twitter followers. His popularity has allowed Nelson to use the platform for philanthropy, including raising more than $2 million to help families pay their dogs’ medical bills.

“This account has grown far bigger, far more fun, and far more powerful than I could have ever imagined,” Nelson said on the WeRateDogs website. “I started it to make a few people laugh and it turned into an absolute giant forever.”

During the talk, Nelson will share his success story, from developing his initial idea to growing his platform and using it for good. Amanda Knief, director of the speaking program, will join Nelson on stage to ask questions to make the presentation feel like a conversation.

“Having someone so young, who’s done something positive on social media, and who’s going so far should be inspiring and ambitious,” Knief said. “You know, if you have a good idea, don’t be afraid to pursue it.”

In preparation for Nelson’s visit to campus, ISU Lectures encouraged students and faculty to participate in We Rate ISU Dogs on Twitter, Instagram and Facebook. With Nelson’s permission, Knief and Bader rated the community’s posts with similar captions and ratings to WeRateDogs.

“It was really fun because we can tag different departments and units around campus so everyone can see their colleagues’ and students’ dogs,” said Bade.

At 5 p.m., one hour before the start of the lecture, Bade and Knief present a slide show with the photos submitted and the ratings given. A couple of cats and a goldfish managed to sneak their way into the submissions, but both will still feature in the slideshow.

The ISU therapy dogs will be guests during the slideshow, and the first 100 visitors will also have a chance to receive a free WeRateDogs sticker designed by Bade.

“We couldn’t host an event about dogs without dogs actually being there,” Bade said. “The therapy dogs have a very important job on campus, so it’s fun to be able to involve them.”

The ISU Bookstore will be selling pet items, WeRateDogs calendars and more throughout the event. Nelson will also be signing items and posing for photos afterwards.

Wedding Planning on a Budget — Cut Costs and Reduce Stress

Many local businesses rely on the elements to sustain business with products and services specifically designed for the winter season. And while winter has returned with a vengeance over the…