Asia-Pacific markets are likely to open higher after a bullish trading session in New York. The tech-heavy Nasdaq 100 Index (NDX) led stock gains in New York, finishing 0.77% higher, and the S&P 500 was up 0.69%. The VIX fear gauge index fell 2.01%. The FOMC is likely to dictate market direction later this week with the base case calling for a 75 basis point hike. Rate traders see a 1 in 5 chance for a larger 100 basis point raise.

Japan’s inflation rate is due this morning, with analysts expecting the nationwide consumer price index (CPI) to hit 2.9% for August, according to a Bloomberg survey. That would be up from 2.6% in July. The higher interest rate, or even higher-than-expected pressures, are unlikely to dissuade Bank of Japan policymakers from easy monetary policy as Governor Kuroda sees the price pressures as temporary. Though Mr. Kuroda is likely to take a tough stance on JPY shorts.

Minutes from the Reserve Bank of Australia meeting in September will be on the lines. Traders are buying AUD against the NZ dollar, pushing AUD/NZD to the highest levels since 2016. Rate bets for the October RBA meeting have increased, favoring a 50 basis point hike. Meanwhile, the RBNZ has already frontloaded much of its policy response and New Zealand’s trade balance is facing mounting headwinds.

Elsewhere, the South African rand fell to its lowest level against the greenback since early 2020. The country’s energy company introduced a Level 6 alert on Sunday mandating six hours of power cuts over a 24-hour period. European natural gas prices fell by around 3%. And China’s central bank is expected to keep interest rates on 1-year and 5-year lending unchanged today.

USD/JPY is trading above the supportive 9-day Exponential Moving Average (EMA) and a trend line from early September. A move higher would challenge resistance at 144.99. An ascending triangle pattern implies a bullish bias, but it would require another contact high. The Relative Strength Index (RSI) is showing bearish divergence and the MACD is muted near its midpoint. A break below support could open the door for a pullback to early September levels. 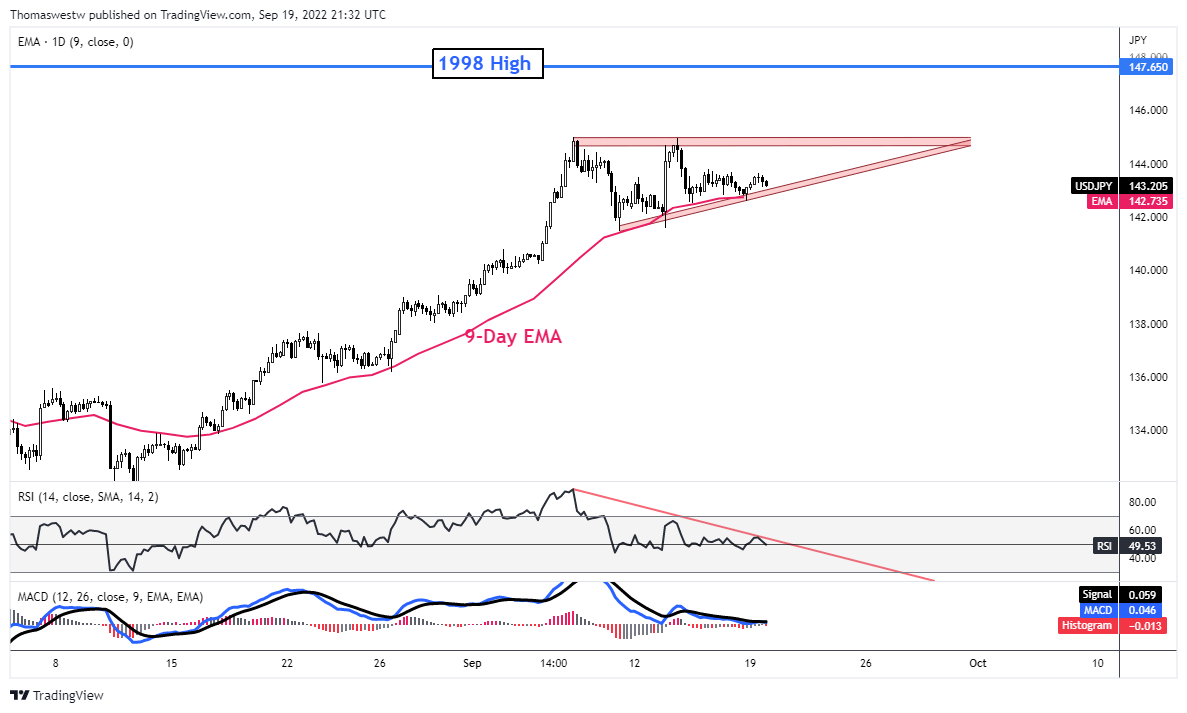 Save Money and Keep Your Cool — Black Friday Starts Now

The Fed Has to Stay the Course Against Inflation