Alternative R&B singer, songwriter and producer Steve Lacy brought the Feel to Radius Chicago on Wednesday night for the third stop of his second headlining tour.

“Welcome to the Give You The World tour,” he told the crowd gathered at the warehouse-style venue in Chicago’s East Pilsen neighborhood. “Let’s get that shit.”

The 24-year-old guitarist opened his show with “Buttons”, the fourth track from his second full-length album, “twins rights.” He then jumped straight into the album’s lead single, “Mercury.” Meanwhile, he played acoustic guitar while concertgoers grooved with their friends, families and partners.

Lacy wrote “Gemini Rights” after breaking up with his boyfriend. The lyrics touch on his feelings of anger, sadness, longing and confusion, but his words are “all for love and all ridiculous too” he said to apple music.

“‘Gemini Rights’ brings me closer to what makes me a part of all things, and that is feelings,” Lacy said in the statement. “Feelings sometimes seem to be the only true things.”

Still, Wednesday’s set paid tribute to the full scope of Lacy’s career as he performed nine songs from previous projects.

Also Read :  What Covid Has Taught the World about Ethics

“I released an album called ‘Gemini Rights’ a few months ago. I’m going to play some shit from it,” Lacy told the audience at the start of Wednesday’s show. “But you all know this isn’t my first job, right? I dropped some shit called “Apollo XXI” a few years ago. Let’s drop some of this.”

During his rendition of “Only If” from “Apollo XXI,” Lacy softly sang, “If I could travel through time, I’d say to myself from the past, ‘You’ll make it’ — before he pulled into a rhythmic performance of his funk.” -Hit “Playground”.

Lacy dove into the songs of “Gemini Rights,” sharply delivering the acerbic lyrics of “Static,” the album’s opening track, with only quiet piano instrumentation in the background.

“Hope you find peace for yourself / New friend won’t fill the void‘ Lacy began before pausing to reflect aloud on how he was ‘pissed that day’ and restarting the song.

Next, the artist performed two songs from Steve Lacy’s Demo, a 13-minute project he released in 2017, along with a song from his 2020 project The Lo-Fis. On Infrunami, Lacy pleads his Ex tries to come back into his life, but “Ryd” finds the singer and a girl driving.

Also Read :  On Top of the World in Ocala, Florida works with small land owner

Throughout the show, Lacy added subtle interjections that captivated audiences and made for a positive concert experience. Before playing “Infrunami,” Lacy encouraged the crowd to smile and loosen up.

And after playing the track, he complimented his fans.

One of the most memorable moments of the set came during Lacy’s performance of “Sunshine,” which he began solo. Show opener Fousheé then abruptly jumped back onto the stage and joined her close friend for a soulful performance of one of the two artists’ many collaborations.

When Lacy began touring last week, he’d just reached another major career milestone: his track “Bad Habit” became his debut single, topping the Billboard Hot 100 for the week of October 2nd. This is his first number one single.

“I really have the number one song in the country right now. Make some noise,” Lacy said before playing “Bad Habit.” “It’s really cool that I get to celebrate this with you guys. I need some number one energy.”

Lacy addressed his encore to his longtime fans. He left the heartbreaking “Gemini Rights” to end the show with two tracks about falling in love: 2015’s “CU Girl” and 2017’s “Dark Red.”

He will be making 24 more stops across North America through mid-November, sharing his feelings of anger, longing and desire with audiences at every show. 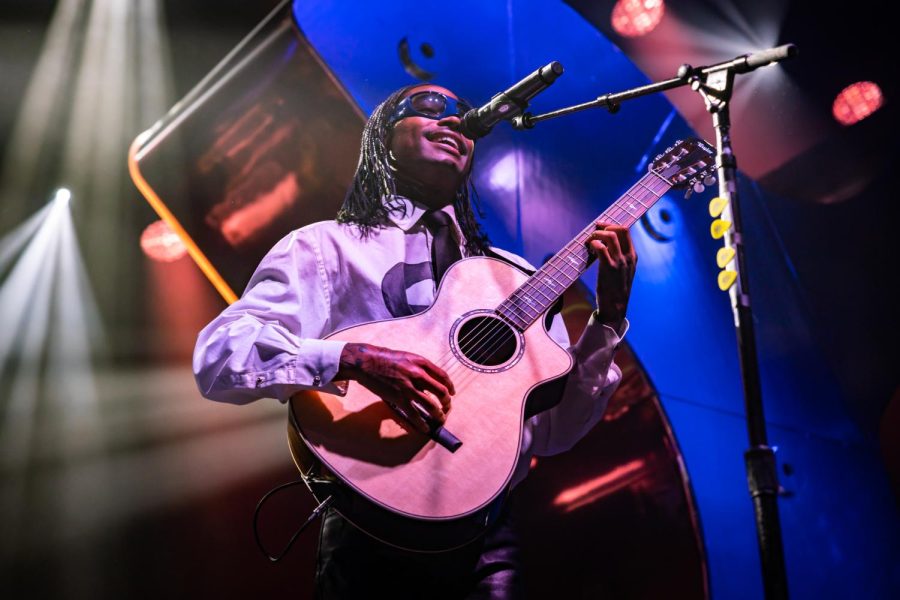 — Liner Notes: “Gemini Rights” reminds us of our bad love habits amidst a funky atmosphere

— Dillo Day 50 brings rodeo and live music back to Lakefill

— The 2022 Lollapalooza roundup from The Daily