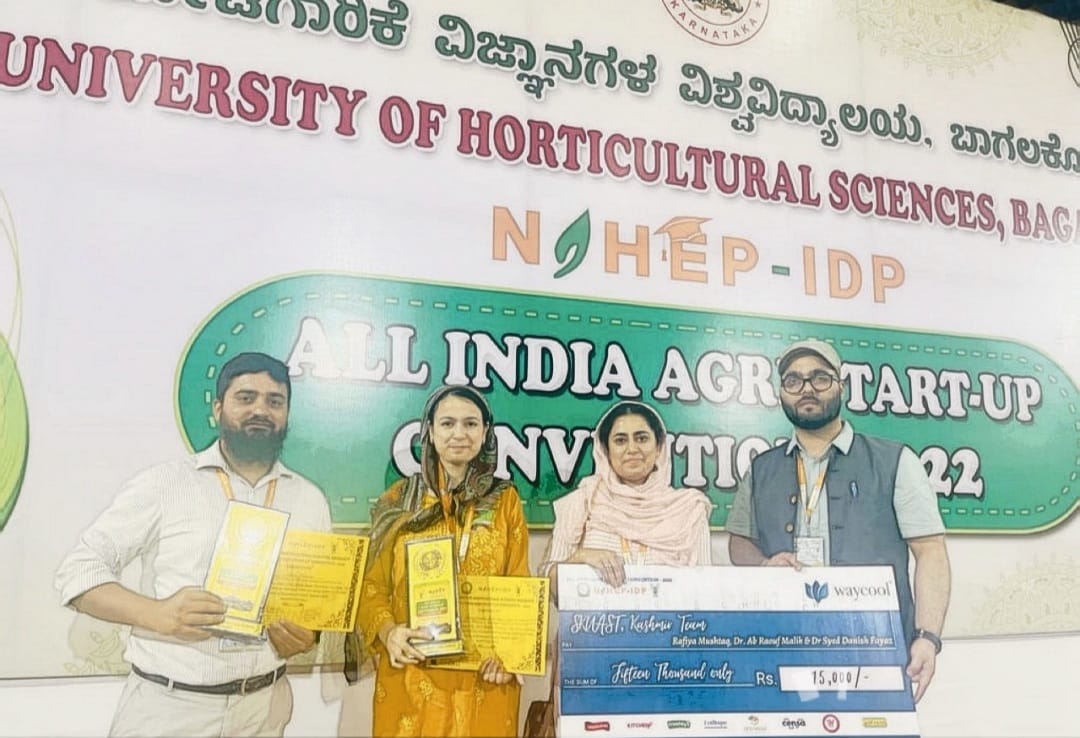 Srinagar, October 22: Two innovative students from Sher-e-Kashmir University of Agricultural Science and Technology of Kashmir won first and second position at the All India Agri Startup Conclave, 2022 held in Bagalkot, Karnataka.
A SKUAST-K official said the university was the only agricultural university with its three teams selected for the finals. 13 National Business Idea Teams were shortlisted from hundreds of startup ideas across India at the event held from 18-20 October 2022. There were two oral presentation categories business ideas and ideas hackathon.
SKUAST Kashmir students, including Owais Ali Wani, Rafiya Mushtaq and Muskaan Un Nisa, along with Innovation and Entrepreneurship Center Coordinator, SKUAST-K Naveed Hamid, competed with the nation’s best young minds at the the three-day convention held in Bagalkot.
The three SKUAST-K innovators were praised by the jury members for their sense and innovative ideas and they appreciated their mentors for preparing them.
SKUAST Kashmir Innovator, Rafiya Mushtaq was named first in Oral Business Presentation among 19 shortlisted candidates and second in the Idea Hackathon, winning a cash prize of Rs 20,000 and Certificate of Merit from DG Manager Hyderabad, Vice Chancellor, Karnataka Agri University and Bagalkot University of Horticultural Sciences and former Vice Chancellor UAS Dharwad.
Rafiya, a Ph.D. researcher from SKUAST-K, has developed an automated apple pruner. Owais has developed a machine to transform waste into different by-products.
Similarly, Muskaan, a graduate in forestry, has developed a concept to use forest waste (pine needles), a waste product, and transform it into organic fertilizer.
The convention brought together eminent industrialists, academics, entrepreneurs and young creators of start-ups.
Naveed was also praised by VC UHS Bagalkot and PI NAHEP Bagalkot for mentoring and motivating the innovative SKUAST-K students to come from 3000 km to Bagalkot to compete and be the main reflectors of the conclave.
The Minister of Agriculture of Karnataka and DDG ICAR who were present at the award ceremony also praised SKUAST-K for its approach to innovation and entrepreneurship.
The Vice-Chancellor, SKUAST-K, Prof. Nazir Ahmad Ganai hailed the young innovators for their great success and for making the university nationally proud. OSD to Vice Chancellor and Co-PI NAHEP, Prof. Azmat Alam Khan also congratulated the innovators.