Despite a 2.5% drop in oil production, North Dakota saw a 1.5% monthly increase in natural gas production and a record volume of gas produced in July. 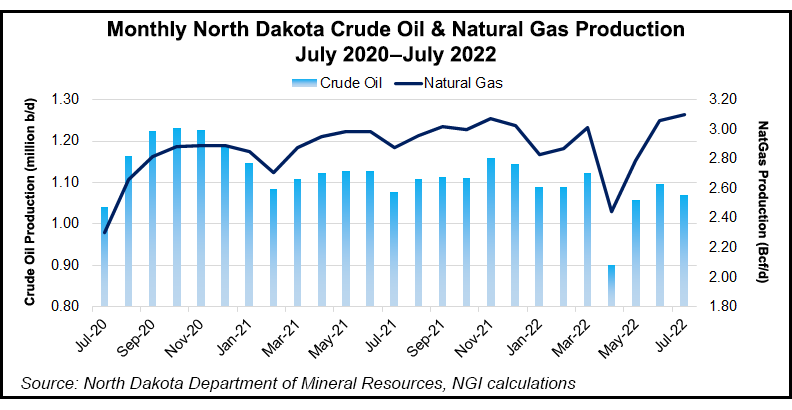 Natural gas production averaged 3.1 Bcf/d, of which 3 Bcf/d, or 94%, was captured and brought to market while the remaining 6% was flared, according to the latest Department of Mineral Resources (DMR) statistics. This compares to June production of 3.06 Bcf/d with 2.79 Bcf/d.

July marked the first time in history that the state’s operators captured and marketed more than 3 Bcf/d.

[Client Collaboration: What type of additional content / information / data would you like to see more of in NGI? Tell us now.]

“We didn’t have record production, but the good news is that we did have record gas capture,” Lynn Helms, director of DMR’s oil and gas division, said Thursday.

READ:  Currency markets are about to learn a lesson in defying economic gravity

“I think we were expecting a slight increase and … that we would hit the 1.1 million b/d mark,” Helms said during a media briefing.

The most likely reason for the decline, he said, was that there were only 27 well completions in June. In July and August, 74 and 66 were completed, respectively.

“What we keep hearing,” Helms said, “is the constant drumbeat that this is a skilled labor issue… that we are simply not able to attract the skilled labor that we need to put more rigs into operation.” and more hydraulic fracturing (fracking) crews.

READ:  UK's Truss forced into U-turn on tax after week of market turmoil

He added that “the Permian Basin is showing some success in this area,” while “the Williston Basin is not.”

The number of active tailcoat crews rose to 17 last week.

Drilling permits in the state saw a significant increase in August, rising to 102 from July’s 53. This was the first time since October 2019 that DMR has permitted more than 100 wells in a month.

“So that’s encouraging,” Helms said. “That would suggest that while we haven’t reached the 1.1 million b/d mark that we were talking about, it’s likely to come.”

The allowable surge could even mean production of 1.2 million barrels a day is on the horizon, he added.

The state’s number of drilled but uncompleted (DUC) wells fell to 465 in July from 483 in June.

“We would like to see that [drop] faster, but it’s sinking,” Helms said. He was “very happy” to see that the number of inactive wells fell by almost 100 to 1,655 in July.

DMR noted in its monthly report that US natural gas storage levels last week were 12% below the five-year average, while the US Strategic Petroleum Reserve was at its lowest level since 1984.

The Energy Information Administration (EIA), meanwhile, forecast average natural gas production in the Bakken Shale of 3.19 Bcf/d in September and 3.22 Bcf/d in October.