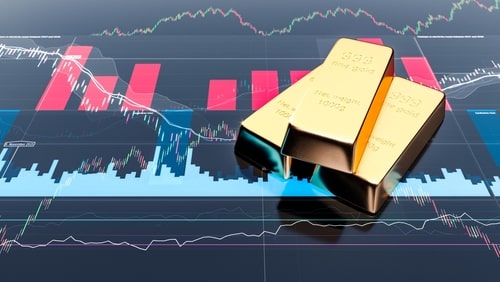 (Kitco News) Gold staged a solid rally on Friday as markets increased bets on a slower tightening cycle from the Federal Reserve after its November meeting. Analysts are now paying close attention to next week’s US GDP data and third quarter earnings reports to gain a better insight into the state of the US economy.

December gold futures rose more than $20 on the day and last traded at $1,657.80 an ounce after hitting a fresh two-year low and nearly breaching key support at $1,620 earlier this week.

The rally was triggered by the market reassessing its rate hike expectations after The Wall Street Journal reported that the Fed would discuss the size of future rate hikes after its widely expected 75 basis point increase in November.

“The idea that we could see the Fed debating whether to gear down to a slower pace of tightening really got investors excited,” OANDA senior market analyst Edward Moya told Kitco News.

Before Friday’s news, markets were looking for a 75 bps hike in November and another 75 bps in December. Now, if the Fed is debating, that could easily justify a half-point shift instead in December. In addition, the US economy may begin to see the impact of the first rate hikes, Moya pointed out.

“Today’s rally is impressive. Gold held the $1,620 level after a big change in rate hike expectations. Gold may have dodged the bullet here. Next week is crucial for the earnings season,” he said. “A lot of market potential for volatility. I’m leaning bullish for next week. We could probably see the idea of ​​Fed tapering supported.”

Moya is paying close attention to next week’s third-quarter GDP data, scheduled for Thursday. Market consensus calls for growth to rebound to 2.1% after two negative quarters.

“GDP data is a big wild card. We’re supposed to be positive after two bad quarters. There’s a lot that could complicate what’s going on here. The risk now is that something breaks for the economy,” Moya noted.

From a technical perspective, gold is still in a downtrend, and risk is tilted to the downside.

“Technically, we’d better hold on here or prices could go down another 5% to $1,560, then to $1,470-80. That’s what’s shaping up technically,” Walsh Trading co-director Sean Lusk told Kitco News. “But from a bargaining perspective, gold saw a six-month washout after peaking above $2,000 an ounce in March. When will it end? How much is enough before stabilization?”

There is a risk that gold could drop another $100 before bottoming out, Lusk warned. “The $1,620 level has to hold in the short-term – potential double bottom on the charts. Investors have sold into the rally. We’ve hit a short-term bottom, so I’m bullish next week. But all bets are off on the Fed meeting in November, he says.

Gold is in uncharted territory at the moment, said Gainesville Coins precious metals expert Everett Millman, noting that gold is well below some key trading levels from earlier this year.

“It will be interesting to see how quickly these higher rates drag down inflation. While higher rates are negative for gold, rates as high as 5% are still below the level of inflation, meaning real rates are still negative. So if the Fed pivots next year, we will see gold respond gradually,” Millman told Kitco News.

TIME TO VOTE: Where is #gold on the road next week? #kitconews #kitcopoll

Another unknown to watch is China and its decision to delay the release of its macroeconomic indicators scheduled for release this week, which included its third quarter GDP data.

Also Read :  “My price will only go up”: Collectors bet on nostalgia as they resell McDonald’s Adult Happy Meals

“China is less transparent and delaying reports on economic data. I’m looking at how long the delay is. If we go a month or more without getting data out of China, that could be a big red flag that drives further haven flows,” Millman added.

Wednesday: Sales of new homes in the US, interest rate decision from the Bank of Canada

Why NYC must keep its markets global

Wedding Planning on a Budget — Cut Costs and Reduce Stress

Why NYC must keep its markets global

Many local businesses rely on the elements to sustain business with products and services specifically designed for the winter season. And while winter has returned with a vengeance over the…