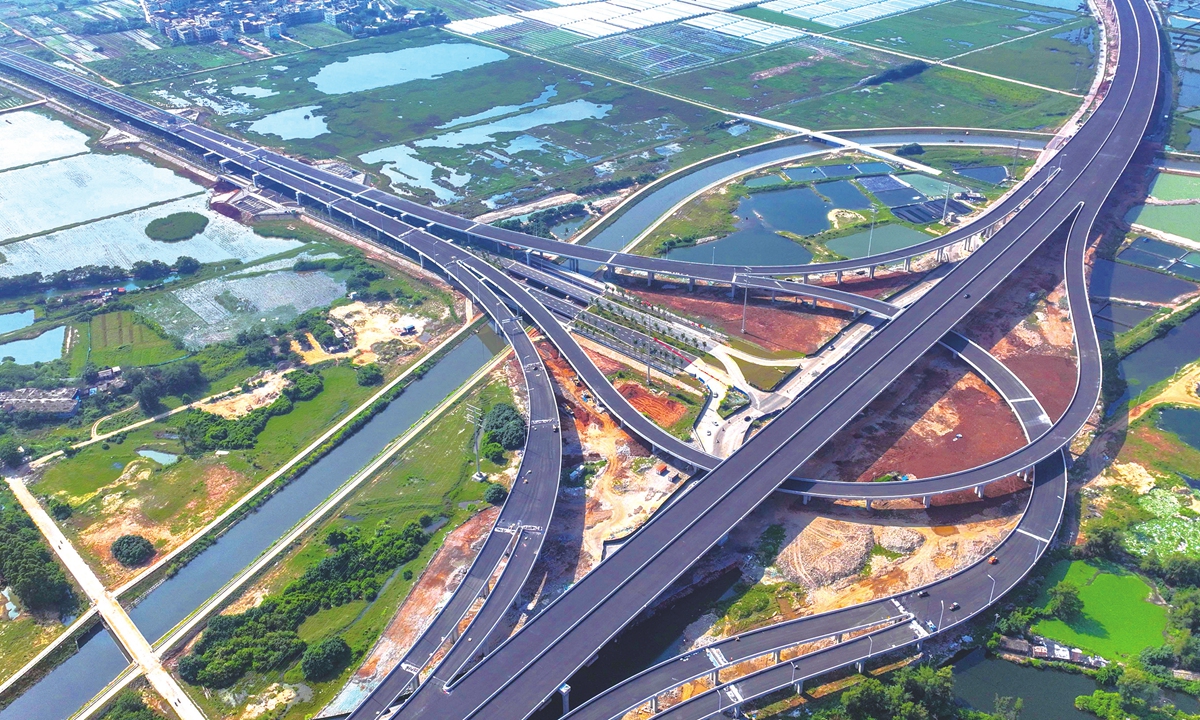 The Haikou portion of the G15 highway in south China’s Hainan province, which is still under construction, is seen on September 14, 2022. It is a major infrastructure project of Hainan Free Trade Port and the only canal connecting the expressway in Hainan Province to the national expressway network. Photo: cnsphoto

From urging the start of construction projects to creating a favorable policy environment for the development of New Energy Vehicles (NEV), China’s National Development and Reform Commission (NDRC) has unveiled a series of guidelines to keep the economy moving forward when the pressure persists.

Experts said a highlight of the next stage’s stimulus work would be the implementation of construction of approved infrastructure projects, while stimulating consumption will be another focus when assessing the current economic situation.

At a press conference Monday, Meng Wei, a spokeswoman for the NDRC, said that following the first batch of policy-based development financing instruments worth 300 billion yuan ($42.81 billion), she will immediately take vigorous action to speed up project construction as possible .

Meng also said that China will review and recommend projects, accelerate capital investment, urge local governments to seize the window and move forward with building projects as soon as possible.

China decided to allocate 300 billion yuan in financial instruments during an executive session of the State Council in late June. The funds were used to increase capital for major projects or to finance projects financed by special-purpose bonds. In August, the Chinese government doubled the quota for these instruments.

Yue Xiangyu, research fellow at China Economic Thought Development Research Institute of Shanghai University of Finance and Economics, said the focus will not be on speeding up the approval of fixed asset investment projects, but on implementing those that have already been approved.

“China’s economic indicators for August looked good, but the main reason for the recovery was last year’s low base rather than a real recovery. In particular, data for the infrastructure and real estate sectors showed that many projects had not progressed past the approval stage and infrastructure was not fully operational to boost the economy as the market expected,” Yue told the Global Times on Monday.

Besides investment, consumption is another highlighted area where authorities are likely to take stimulus measures. Meng said the NDRC is accelerating the investigation of introducing policies and measures to create new consumption scenarios and promote a faster recovery.

Chen Jia, an independent research fellow in international strategy, said the economic contribution of consumption is steadily increasing, so the authorities are stepping up efforts to further advance the sector.

“Capturing the consumption sector is like capturing the locomotive of the economy,” Chen told the Global Times, adding that stronger-than-expected consumption has demonstrated the effectiveness of consumption stimulus measures at an earlier stage.

READ:  We Are Becoming A PowerSkills Economy – JOSH BERSIN

In particular, the NDRC revealed their plans for the NEV sector, such as: B. Optimizing the political environment to make it more conducive to development and promoting global cooperation.

According to Chen, if China can promote application scenarios for autonomous driving, many connected industries could “explode”, including next-generation communication networks and new-energy batteries.

“Considering that China has broken the bottleneck in manufacturing 14-nanometer chips along with its huge population base and demand driven by urbanization, the potential for NEV application scenarios is limitless. The authorities are not only trying to boost NEV consumption but also keep an eye on the development potential of future industrial clusters,” Chen noted.

Cong Yi, a professor at Tianjin University of Finance and Economics, also said that China has adopted a multi-form policy that will eliminate market blockages and alleviate the difficulties faced by small businesses. Policies are continuously being rolled out in those directions, he said.