The Bank of England is likely to delay selling billions of pounds of government bonds to encourage greater stability in gilt markets after the UK’s failed ‘mini’ budget.

The bank had already delayed the start of its sale of £838bn worth of gilts it bought as part of its quantitative easing program from October 6 to later this month. It is now expected to bow to investor pressure for another pause until the market calms down.

The Financial Times has learned that the bank’s top officials have come to this view after describing the gilts market as “very distressed” in recent weeks, a view supported by its Financial Policy Committee.

Investors have also warned that the central bank’s plans to start selling bonds in its portfolio later this month could destabilize markets.

Although 30-year gilt yields fell from a recent high of more than 5 percent to 4.32 percent on Monday, they remain well above the 3.75 percent reached before the mini-budget.

Also Read :  Markets waiting for slew of US economic data

“I’m not sure it’s prudent to leave immediately because the market is so vulnerable right now,” said Jim Leaviss, chief investment officer for public fixed income at M&G Investments.

Sandra Holdsworth, UK Head of Rates at Aegon Asset Management added: “I’m not sure they can go ahead without risking further problems having recently had to prop up the market.”

The BoE move will put on hold the start of the UK’s QE rollback – a process other central banks have begun to reduce their swollen balance sheets and increase their maneuvering room in a future currency or financial crisis.

BoE officials claim that inflation control can be implemented by changing interest rates rather than so-called quantitative tightening, the opposite of QE. At the pace the bank has set, QT would take a decade or more to complete. 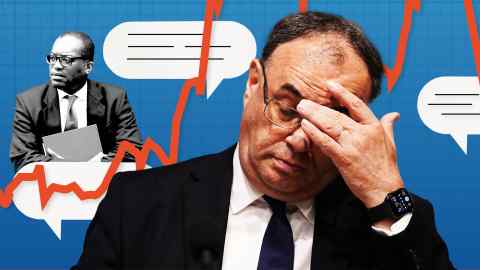 BoE governor Andrew Bailey confirmed in Washington on Saturday that the MPC would seek to use bank interest rather than asset sales as its main weapon in the fight against inflation.

“The MPC is not currently using the stock of assets as an active tool of monetary policy,” he told an audience of central bankers. “The intention was to gradually and predictably reduce the QE stock in a way that was not tied to underlying economic conditions,” he added.

Delaying the sale of bonds would not require a vote from the bank’s monetary policy committee. At its previous postponement last month, the bank believed turbulent market conditions had hit the “high bar” it set to change the timing without a vote.

The BoE is still hoping to shed £80bn of assets in the first year of the balance sheet rundown through a combination of maturing assets and active sales.

The bank is likely to maintain its policy of maturing maturing bonds without reinvesting its proceeds in other securities. But active selling could create further market turmoil, hurt the economy and complicate rate hike plans, said ING rates strategist Antoine Bouvet.

Also Read :  US markets start the week in negative fashion

“They don’t want to let anything kill their chances of further rate hikes, which is their only proven tool to bring down inflation,” Bouvet said. “I’m not sure if this market can accommodate the BoE selling as well.”

Some analysts argue that the BoE may have to adjust plans if it decides to start quantitative tightening.

Rather than selling roughly equal amounts of short-, intermediate- and long-term gilts, the central bank should focus on short maturities, said Daniela Russell, head of UK rates strategy at HSBC. This would allow the long end of the gilt market, which was at the heart of the chaotic sell-off that sparked a pension fund liquidity crisis, to “continue to recover,” she added.