CNBC’s Jim Cramer warned investors on Friday to ignore the guards when it comes to their portfolios and be ready to take advantage of good deals.

“In the end, you’re only going to regret it if you didn’t buy anything on the big stocks. When the market is finally oversold enough, that’s when you need to sell,” Cramer said.

Stocks gained on Friday, but ended an uneventful week, with losses driven by warmer-than-expected economic data, the Federal Reserve’s 75-basis-point rate hike and its tough rhetoric on inflation.

“We’re in a very emotional time that has a lot to do with how individual companies are doing and a lot to do with what Wall Street expects of them. The bottom line? Until these expectations are lowered, you shouldn’t feel it. everything is safe,” he said.

Cramer said he is watching for the release of the consumer price index next week, along with further comments from Cleveland Fed President Loretta Mester that could further shake the market.

He also previewed next week’s earnings schedule. All earnings and revenue estimates are courtesy of FactSet.

Investors worried about BioNTech should cross their fingers that the company reports that China has ordered “more than a billion” of Covid-19 vaccines, he said.

Cramer said it’s unfair that the company is known as a pandemic game.

He said he was interested to know if the chip shortage would improve before the economy took a turn for the worse.

The Charitable Trust is willing to buy more Disney shares if it drops enough, Cramer said.

He said that while AMC could turn a profit in its next quarter, he wouldn’t bet on it.

Cramer said his philanthropy remains with the stock.

“The boom era allowed everyone and everything to be exposed, so they did,” Cramer told Compass and Matterport. 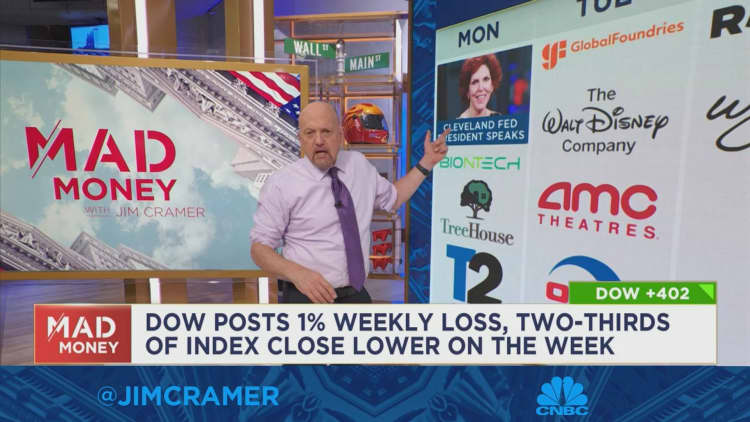 Click here to download The Jim Cramer Investment Guide help you build long-term wealth and invest smarter at no cost.