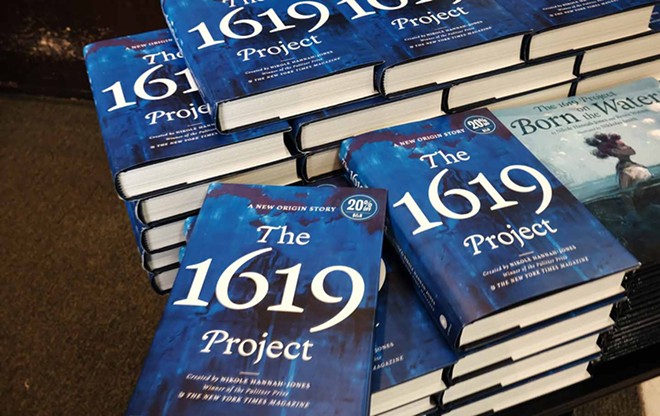 As my parents were walking down a street in China, a man snuck up next to my mother and asked if they had a Bible.

In accented English, he explained that some Americans brought Bibles to give away in this communist country. My parents were pig farmers from Illinois who, over the years, visited their colleagues in China, Ukraine, Poland and Denmark to exchange ideas.

When Mom told this story more than 30 years ago, I was so grateful to live in a country where the government didn’t dictate what people could read.

I’m not sure I still live in a place like this.

Unfortunately, we live in a society where both left and right try to determine what others can read.

I’m stubborn enough that when someone tells me not to read something, it’s the first thing I add to my reading list.

Years ago a Protestant taunted me for my curiosity about the Apocrypha, the four books of the Bible recognized by the Catholic Church but not by most Protestant denominations.

My answer was to read it. It helped me understand differences between Catholic and Protestant teachings. It adds greater context to the 400 years before Jesus was born, and his prose is beautiful.

READ:  The Rings Of Power Vs Books: 5 Biggest Differences

Today, race is often at the heart of the book ban debate. I recently interviewed Republican gubernatorial candidate Darren Bailey and he said that critical race theory should not be taught in schools, which it is not currently.

Proponents of the doctrine of critical race theory claim that race is a social construct and that racism is not only the product of individual bias or prejudice, but also something embedded in legal systems and policies. Conservative critics counter that the basis of the theory is that the United States is inherently racist and that this causes students to feel guilty about past actions by white people.

How about letting the children read the works and decide for themselves?

CRT critics often point this out That 1619 projecta Pulitzer Prize-winning endeavor Magazine of the New York Times Looking at the legacy of 400 years of slavery in today’s United States.

My wife gave me a copy for Christmas last year The 1619 project. It was fascinating reading. I agreed with some conclusions in the book. I don’t have others. But that’s okay. When you read something, it should make you think, not hold on.

I also make a point of reading authors I know I won’t agree with. Sometimes I even read material that I know I will find repulsive if I go in.

For example, in 1995, after the Oklahoma City bombing, I walked into a bookstore in Davenport, Iowa, and asked if they had a copy of the gymnast diaries, a racist tome said to have inspired the assassin.

The elderly woman who owned the shop narrowed her eyes and growled, “We don’t sell that here.

no But I wanted to understand what motivated the hate in the terrorists. When I finally received a copy, I found the ideas it contained disgusting. But it has given me insight into the distorted reasoning behind the white nationalist movement.

One of my favorite books is Killing a mockingbird. When I read the novel as a teenager, I was fascinated by the story of a lawyer taking a stand against a racist legal system in the South. I loved the book so much that when we were expecting our second daughter I decided to name her Scout after the book’s protagonist (my wife dismissed the idea).

Today there is a push to ban the book in schools. Some people dislike it because it uses a racial epithet in the context of Southern culture at the time. Others say it’s misogynistic because it involves a false rape allegation. Still others don’t like a white man being cast as a hero trying to save a black man.

All of these critiques seem to make good subject for discussion in a classroom. Instead, weak school administrators forbid its use.

So what am I reading during Banned Books Week? Spring, Diary of an outsider is an excellent non-fiction book. It’s about a lesbian journalist who returns to rural Louisiana, where she grew up, to make a documentary about a transgender man her grandmother knew in the 1940s.

I’m not done with it yet, but so far it’s a brilliant read.

i read too Every good effort by Timothy Keller, an evangelical pastor, who talks about finding spiritual purpose in our ministry. I enjoy discussing this with others early Wednesday mornings.

Reading creates bridges of understanding between different groups. What could be a better goal in our divided society?

Scott Reeder, a staff writer for Illinois Times, can be reached at [email protected]

President Droupadi Murmu on two-day visit to Gujarat from Monday

How the Bank of England threw markets a lifeline

Brits struggling with rising bills should try to get a better-paying job or cut spending, Conservative Party leader Jake Berry has said. The senior Tory figure was grilled over the…