Howard Wolk is an entrepreneur and Co-President of Cross Country Group (CCG). He served on Associate Council for the Transition Team during the Clinton Administration and was part of Vice President Gore’s Task Force on Reinventing Government. John Landry is a historian and senior consultant at the Winthrop Group. Previously, he was an editor for 13 years Harvard Business Review.

Below, Howard and John share 5 key takeaways from their new book: Launchpad Republic: America’s Entrepreneurial Edge and Why It Matters. Listen to the audio version – read by Howard and John themselves – on the Next Big Idea app. 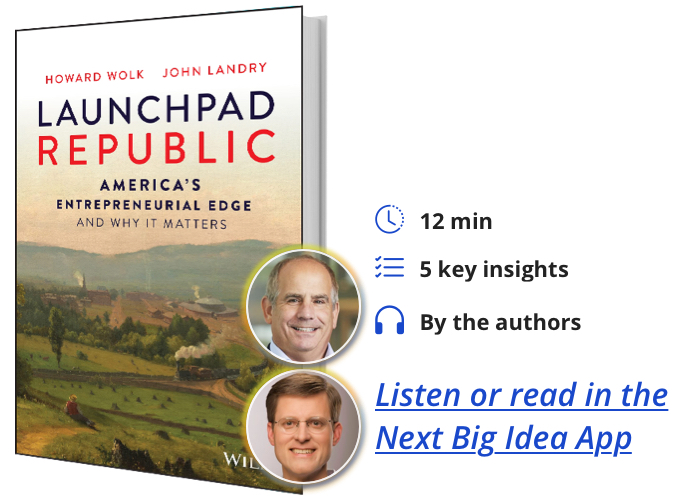 Most of us grew up hearing the stories of the great entrepreneurs, from Cornelius Vanderbilt and Andrew Carnegie to Henry Ford and Steve Jobs. But when we think about how our economy works overall, we tend to focus more on what the big incumbents are doing. Think how much leverage we give to the Dow Jones Industrials, like twenty big companies (across many industries) in a $25 trillion economy really means a lot.

All are for entrepreneurship; We just don’t rely on it for economic progress in our mature 21st century economy. But in fact, emerging companies have fueled much of our progress throughout history. They perform much of the major innovation in business that incumbents ignore because they focus on continuing to operate at scale. Regardless of how wealthy entrepreneurs become, society receives most of the value they create. Entrepreneurs create value for themselves, for our economy, and they make even great companies better.

Most stories about the US economy downplay entrepreneurs. They take these risk-takers for granted and criticize them for limited government support or unequal benefits to society. But the entrepreneurial tradition in the US is very different than in most other countries. Only in the US have we allowed promoters to periodically dethrone incumbents. Other countries tend to protect existing businesses, often under the guise of protecting workers and communities from displacement. Americans have tolerated far more risk and creative destruction to encourage startups.

“Only in the US have we allowed promoters to regularly dethrone incumbents.”

We open the book with the story of Uber and its founder Travis Kalanick. Uber dared to attack established taxi companies with an attractive new transportation app. Kalanick famously explained that while Uber breaks laws virtually everywhere it operates, the app creates so much value for customers that most U.S. cities and states would change those laws to allow Uber to operate allow – and he was right. In contrast, most governments in Europe and elsewhere preferred to protect the incumbents and oust Uber. It really shows the difference in political economy between the US, which supports entrepreneurs, and the rest of the world, which remains suspicious of entrepreneurship.

Also Read :  This Philly entrepreneur made her reality TV debut on season 43 of 'Survivor'

3. Entrepreneurship is messy and often political.

We tend to look back on the shaping of our federal union as the congenial result of brilliant, far-sighted, common-minded men arriving at a unanimous set of compromises. But those founders were just as polarized as we are now, which was good because our constitution made it difficult for the government to grant privileges to anyone. It was messy.

The Broadway Musical Hamilton shows some of those tensions, but the actual differences ran much deeper – to the benefit of future entrepreneurs. Alexander Hamilton favored corporations with national subsidies and monopoly privileges to compete against British giants, while Thomas Jefferson favored local monopolies to ensure that every community could be run by gentlemen of leisure with education and public interest. Members of these opposing positions hated and fought each other so much that we eventually discouraged monopolies both national and local. From the outside it was a terrible mess, but it resulted in a country and economy with exceptional dynamism that essentially institutionalized competing interests. In doing so, we ended up creating an economy that welcomes entrepreneurial energy.

Entrepreneurship has done much to increase inequality. The richest people tend to be big innovators, like Elon Musk and Jeff Bezos, with rewards out of all proportion to each other’s merits. But that’s part of capitalism – to get people to save money and invest in risky ventures, we have to offer them the potential for high returns. At the same time, entrepreneurs can undermine the worrying inequalities that result from government privileges. There are three types of inequality: inequality of wealth, income, and that which results from special privileges, often instituted by the government.

“The engine of entrepreneurship can dethrone monopolies and all kinds of privileged positions.”

If we didn’t have entrepreneurship, we would look for advancement from big corporations backed by big governments. This would eventually lead to nepotism, where favors (subsidies or protections) would be given to certain corporations that would make them socially superior to the rest of us. With entrepreneurs and citizens constantly cracking down on government support, we prevent government-driven inequality that poisons society.

This also applies to the monopoly. Some companies get so big and powerful that we might need the government to clip their wings, but entrepreneurs are a much better way to break monopolies than government intervention. The grocery chain Atlantic & Pacific Tea Company (A&P) innovated and by the early 20th century became a dominant grocery chain, putting thousands of small grocers out of business in cities across the country. These grocers and their suppliers appealed to state and federal government officials for help, but received few caveats about A&P’s conduct. What really brought down A&P was the next wave of food innovation: the supermarket. It was the innovators who won the customers and all but put A&P out of business. In this way, the engine of entrepreneurship can dethrone monopolies and all kinds of privileged positions.

Entrepreneurs have harmed the environment in a variety of ways over the centuries. Aggressive steelmakers like Carnegie polluted the air, land, and water in Pennsylvania. But we can harness the same engine of creativity and risk-taking that drove these companies to mitigate and protect themselves from climate change. Governments can help with infrastructure that forces companies to pay for pollution, but climate change is such a massive problem that we need fundamental innovation. It’s not enough to come up with a good idea in a university lab. We need entrepreneurs to invest in this idea, test it in the market and scale it up.

“Leveraging entrepreneurs to commercialize innovation and bring change to market can be a critical catalyst in solving our most pressing climate change problems.”

Check out the history of electric cars. The federal government tried for decades to get the big auto companies to invest in this technology, but EPA fuel economy requirements fell short. It was incremental progression until finally an entrepreneur (Elon Musk) and his startup (Tesla) made electric cars attractive to consumers. He took a more radical approach to pushing for electric vehicles and was bolstered by government subsidies to make them a little more affordable to buy.

Through this paradigm, seismic platform changes can be brought to market. It makes it easier for new innovators to enter the market and puts pressure on large companies to change. The big companies simply wouldn’t do it unless forced to do so by competitors. Leveraging entrepreneurs to commercialize innovation and bring change to market can be a critical catalyst in solving our most pressing climate change problems.

To hear the audio read by co-authors John Landry and Howard Wolk, download the Next Big Idea app today: